We’re busy gearing up for ‘Turning Tides: First in the Fight’ – an innovative promenade performance devised by young women and inspired by true stories of women’s fight for the vote, over 100 years ago…

This performance is the latest phase in the ‘Her Hidden Histories’ project, which we have been running in partnership with small heritage venues across Manchester since the beginning of last year. Earlier phases saw young women from Wythenshawe devise and perform ‘In the Driving Seat’ at the Museum of Transport (June 2017), telling stories of the first women to work in the transport industry and young women from Gorton devise and perform ‘Top of the Bill’ at the Greater Manchester Police Museum (July 2017), looking at pioneering women in policing. Now both groups – from Newall Green High School and Cedar Mount Academy – are coming together to pool their knowledge, skills and ideas and turn their focus to the battle for women’s suffrage.

In this phase of the project, the groups have visited and taken inspiration from the collections at the People’s History Museum, the Pankhurst Centre and the Working Class Movement Library. They have taken part in music workshops, being supported to write their own rousing and anthemic songs by singer-songwriter and long time enJOY arts collaborator Claire Mooney. They have also taken part in dance sessions where Ruth Jones and Trixi Bold have helped them to choreograph some wonderful movement sequences.

The performances of ‘Turning Tides: First in the Fight’ will take place on Thursday 31st May at 7pm and Friday 1st June at 3pm and 7pm at Victoria Baths. Tickets are free but, as this is a promenade performance exploring the whole of this incredible historic building, audience numbers are limited so booking is essential.

‘Her Hidden Histories’ is funded by grants from Heritage Lottery Fund, Arts Council England and the Granada Foundation.

For more information please get in touch!

Time certainly flies when you’re having fun – it’s now less than 2 weeks until young women from Cedar Mount Academy perform their special site-specific piece at the Greater Manchester Police Museum! We can’t wait to share what the group has been creating and the good news is you have two opportunities to join in the fun! Please call or email us for FREE tickets (details on the flyer below) and be speedy as spaces are limited!

We had another great afternoon with young women from Cedar Mount Academy at the Greater Manchester Police Museum yesterday. As part of our Her Hidden Histories project, the group are in the process of creating a promenade performance at the museum and so we took this opportunity to rifle through the fascinating archive material for additional inspiration. We were joined once again by Heather Roberts, our fantastic Archive Consultant on the project, who helped the girls to explore and make sense of what they found. The group were full of energy and enthusiasm, despite having come straight from their school sports day, and left buzzing with even more creative ideas for the performance – which is in just over 2 weeks time! Watch this space for more details…

We had a fantastic afternoon at the Greater Manchester Police Museum yesterday, for the next phase of our Her Hidden Histories young women’s project. Young women from Cedar Mount Academy had great fun exploring the museum, quizzing the volunteers and learning to march in formation! The group are currently working towards a performance at the museum, inspired by true stories of the first women to work in policing. We’ll be bringing their ideas to life in creative sessions over the next few weeks and, if today’s visit is anything to go by, it’s sure to be a lot of fun! Check back soon for more details on the performance.

Less than 3 weeks to go until our ‘In the Driving Seat’ performances by young women at the Museum of Transport! We can’t wait to share what the group has been creating and the good news is you have two opportunities to join in the fun! Please call or email us for FREE tickets (details on the flyer below) and be speedy as spaces are limited! 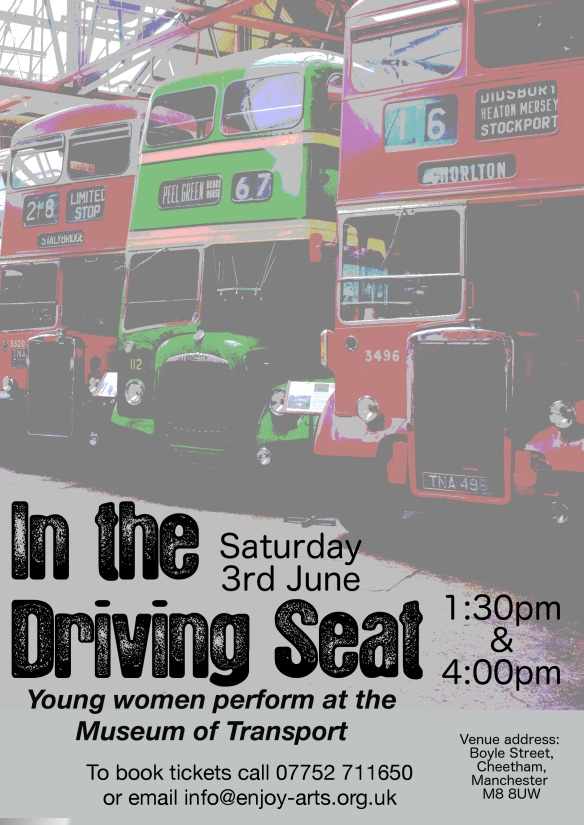 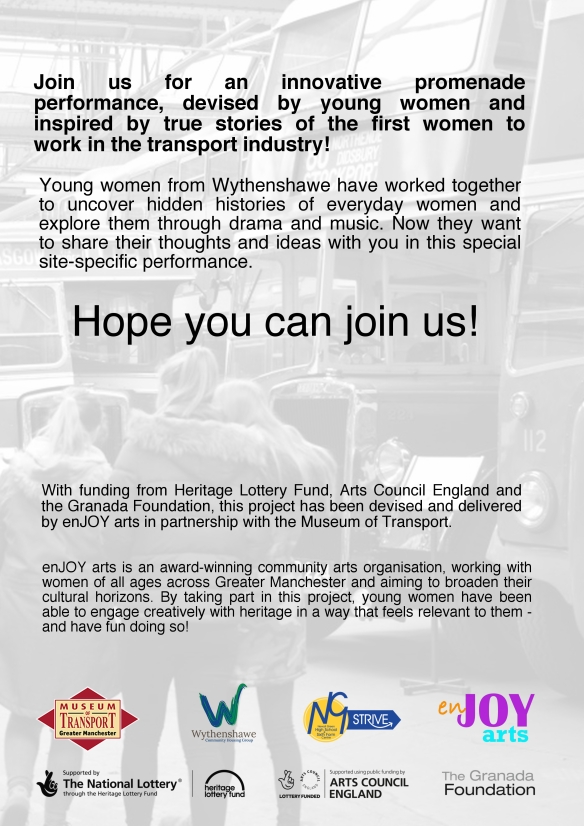 These performances are part of our ‘Her Hidden Histories’ project, working to creatively engage young women and other new audiences with small heritage venues across Manchester. More news soon on our next performance at the Greater Manchester Police Museum!

We had another great day at the Museum of Transport yesterday, exploring the archives and uncovering some fascinating stories with our Wythenshawe group of young women. The group are working towards a performance at the museum as part of our Her Hidden Histories project and so we took this opportunity to dig a little deeper and start taking creative inspiration from the museum’s collection. We were joined on the visit by the wonderful Heather Roberts, our Archive Consultant on the project, who helped the young women get to grips with some great journals, records and photographs from a bygone age. The group particularly enjoyed rooting through all the ‘old stuff’ and clambering into the driving seats of various different vehicles! They’ve got loads more ideas for their upcoming performance now so we’ll be sharing more details of that very soon… 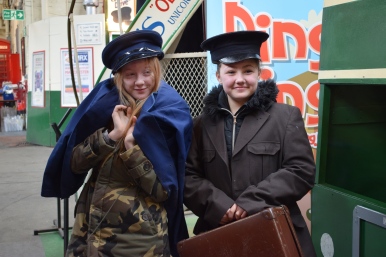 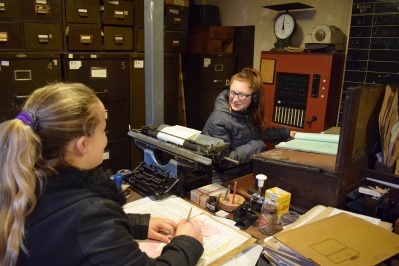 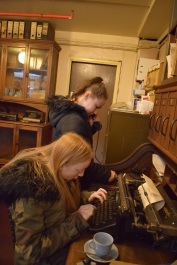 We had a great day at the Museum of Transport on Saturday as part of our Her Hidden Histories young women’s project. It was our Wythenshawe group’s first visit to the museum, where they will be creating a performance about women in the transport industry in June. The group loved dressing up, exploring the buses and rummaging around the old office rooms – getting a real insight into some stories of the past. They left buzzing with creative ideas which we’ll be working on in our sessions over the next few weeks, so watch this space!

It’s beginning to look a lot like Christmas… and so ends another busy year for enJOY arts. 2016 certainly hasn’t been without its challenges for many, making creative community projects more relevant than ever and we’re determined to look forward to 2017 with hope and positivity. Looking back over this year, however, we’ve also found plenty to enJOY (scroll down to see our photo slideshow)!

In our first year as resident artists at Elizabeth Gaskell’s House, we’ve delivered a number of exciting projects in partnership with them; from creative storytelling with older people as part of Dementia Awareness Week in May, to family activities inspired by Beatrix Potter during the summer holidays. We’ve also been working with the House to develop their education programme, delivering interactive drama workshops to both school and university groups. For Heritage Open Days in September, we enjoyed working with members of the local community to develop an exhibition of Living Memories of the House and neighbourhood.

By far our biggest partnership project this year was ‘Gaskell: The Musical!’, working with local women to devise and perform an original musical which premiered as part of Manchester Histories Festival in June. We had tremendous fun working with such a warm and lively group, many of whom had never performed before and really grew in confidence throughout the project. The initial performances were such as smash hit (selling out 3 shows) that we were asked to reprise the run in September, which we were delighted to be able to do. Harnessing the enthusiasm of the talented cast, and with the support of Elizabeth Gaskell’s House and One Manchester, we’ve now been able to secure more funding to run a regular creative women’s group which we can’t wait to start in the New Year.

We’ve continued to develop other projects with women and girls throughout 2016. For International Women’s Day, we worked with young women from Wythenshawe and Salford to create a textiles exhibition celebrating women from Manchester’s history. This was displayed at Elizabeth Gaskell’s House and there were squeals of delight from some members of the group when they first saw their own handiwork on show in such a beautiful historic venue! Some of the young women who worked on this display had also taken part in our ‘Tales of Manchester Life’ project in 2015 and we were thrilled when this project was recognised with a Community Histories Award in March. The girls loved attending a fancy event at Manchester Town Hall to receive this award and we were even more pleased to officially become a multi-award-winning organisation!

Over the summer, we were very pleased to be able to return to MASH – a fantastic organisation for women which we first worked with as students back in 2011 – to deliver a series of drama workshops in their weekly drop-in. The women here really enjoyed the opportunity to play creatively with props and costumes and devised all sorts of imaginative scenes, from a botched bank robbery to a zombie apocalypse!

Aside from solely female-focused projects, we’ve continued to work with hard to reach young people across Greater Manchester and Salford, delivering the Bronze Arts Award with groups from Eccles to Monsall. It was lovely to be shortlisted by Manchester Young Lives as their Partner Organisation of the Year and we hope to develop more projects with them in 2017.

We’re very much looking forward to 2017, not least because we’ll then be able to announce our plans for an exciting new young women’s project we have in the pipeline…

But for now, may your days be merry and bright – and we hope your festive season is an enJOYable one!

It was fantastic to bring the young women who took part to a great event at the Town Hall, organised by Manchester Histories. Here, we got to find out about all sorts of wonderful projects and the incredible people who run them, including Greater Manchester Coalition of Disabled People, PANDA, RECLAIM and WOWzone.  Jorge, Tammin & Tyra from our project spoke confidently in front of a large audience and all the young women were thrilled to be presented their award by the lovely former Coronation Street actor Julie Hesmondhalgh!

We are so proud of all the young women involved and very grateful to Manchester Histories for this honour. We’d also like to thank our project partners, Elizabeth Gaskell’s House, Tandem Theatre, Wythenshawe Community Housing Group and Salford Youth Service and the project’s funders, Heritage Lottery Fund, Arts Council England and Community First.

We’re looking forward to developing more creative heritage projects with these young women and others in future – watch this space!